Tommy Pickering has won this year’s Maver Hayfield Lakes Winter Carpa series! The league, which is contested over a total of twenty (20) rounds between early November up until late March / early April, produced a forty (40) peg final pegged across the entire complex to see who would be crowned 2019 Champion.

Anglers must qualify for the final by winning one of twenty (20) matches held on either Adam’s lake or Island lake as well as compete in a minimum of six (6) qualifiers during the qualification period for their chance to fish for a total prize fund of £6,000. Qualifiers were held every week with two anglers from each (one from Adam’s lake and one from Island lake) progressing through to the final held on 14th April.

Tommy qualified for the final after topping round sixteen (16) on Adam’s Lake to qualify for what has become of the most popular events held at the venue. Below, Tommy reflects on this year’s final, which ultimately saw him crowned Champion having just missed out on qualifying for this year’s Mega Match This final the day before. 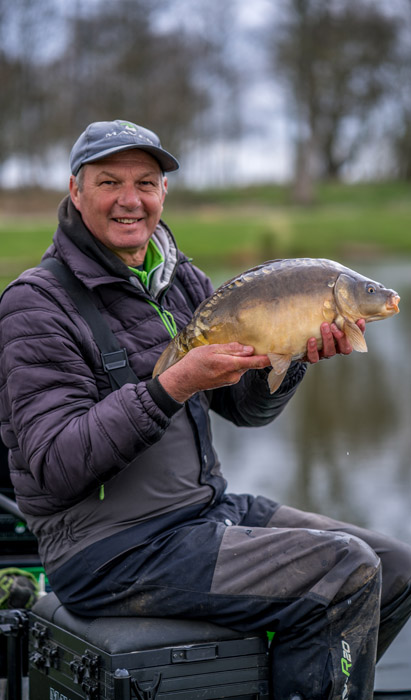 “After coming agonisingly close to qualifying for this year’s Match This final finishing in second place on the qualifier at Hayfield, I was back at the venue the very next day for the final of the Maver / Dynamite Carpa Series“.

“Forty (40) sell out qualifiers held throughout the winter meant there was plenty to fish for on the day in the way of prize money with each lake on the day guaranteeing a winner’s purse of £1,000. I drew end peg 42 on Island lake, which I was really happy with. I’ve been spending quite a lot of time up at Hayfield recently and felt I stood a good chance from this area. However, I had reigning Match This Champion, Dave Burley, next to me on peg 44, so I was going to have to work at it“!

“The plan of attack was to fish a banjo feeder to the rope and 11m down my edge where I found approximately 3ft of water. Despite fancying my chances at the draw, I didn’t get off to the best of starts with just a few carrissio and one carp gracing the net up until the midway point in the match. However, around two hours in, I managed to put a bit of a run together finding four (4) carp in as many casts, plus two (2) fish from down my edge. I’d noticed at this stage in the match Dave had also started to catch at top two plus two, as well as down his edge, so it ended up being a great tussle to the end“.

“I finished the day with thirteen (13) carp and seven (7) carrissio plus two (2) bream. Dave had weighed in 100lbs, but I managed to just pip him offering 105lbs to the scales“!

“So, a great day managing to win the Island lake outright as well as the event overall with the top weight from Adam’s lake being around 70lbs. After a couple of near misses of late, it’s nice to finish the winter period as Hayfield Winter Carpa Champion and £1,000 better off“.

“It’s been a long but enjoyable series. A big thanks to Noelie and Robin and a massive, massive thanks to Graham wall & Andy kinder, who run a fantastic league between them. Finally, a massive thanks to Dynamite Baits for their generous sponsorship with the top three on each lake all receiving vouchers“.

“If you want to fish a winter series next winter, then look no further“.