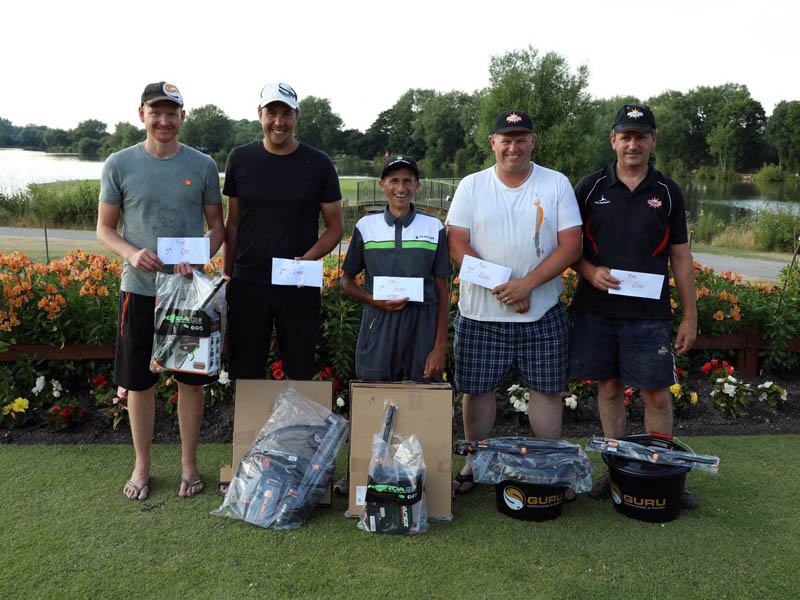 Andy Kinder has won the annual 2018 Barston Lakes festival for a second year in a row, thus defending his title in the process! The Guru sponsored event takes place over three days with sixty (60) anglers taking part in sections of ten. The popular festival attracts some of the country’s best anglers from all over the country, all competing for the £1,000 first place prize as well as over £1,200 worth of tackle prizes and biggest fish prize.

At the end of the three days, Andy finished with a perfect three point score – the only angler to do so on this year’s event – to seal overall victory.

Below, Andy reflects on what was a superb event.

“Having won this event the previous year, I was looking to try and repeat the feat again this year, but Barston is one of those waters that can kick you right where it hurts, but can also be very rewarding if you work hard at it“.

“The opening day of the competition see’s a draw to sort out angler’s zones over the three days. Zones were made up of twenty one (21) anglers with three (3) sub sections of seven (7) anglers fishing for points“.

“Day one saw me draw peg 93, which was in zone 2 – not the best of areas, but a fair section of seven with no real dominant pegs. However, it was going to be a hard section to score decent points from with any carp caught being a real bonus from here“.

“I setup three lines of attack including a method feeder long at 60m, which made use of a new prototype Signature Pro 13ft Distance feeder rod with 0.23mm Jurassic main line tied to a size 10 CS24 hook offering a wafter hookbait. If any carp came along, I wanted them out! I have to say, the prototype rod was awesome, but more of that at a later date”!!!

“I also setup a 30m line where I aimed to ping 8mm pellets, which also gave me the option of fishing a method, bomb or waggler on this line. Finally, I setup a token margin line just in case“.

“To cut a long story short, I caught 40lb of skimmers, a single F1 and a rogue carp of around 9lbs all caught on the long line to give me 51lb. This was enough to win the section. Job done on day 1“.

“Day two of the event saw me placed in zone 1. Looking at how the sections had been pegged, there were some good pegs available, but two pegs in particular stood out from the rest for good section points – these being pegs 29 and 31. Upon opening the draw card, I saw the number 29 looking back at me. Half the job was done. All I had to do now was try and catch some carp“.

“I approached day two the same as the previous day with the exact same set up – 0.23 mm Jurassic line with a small 10 gram zinc pear lead, size 12 CS 24 hook to 0.20mm MVR line. The difference being, however, I felt the fish would feed on the shorter line with there being a nice gravel area on that line and so it proved to be! I caught 110lb of carp mostly on the 30 metre line with two (2) caught long on the method. However, bomb and pellet was by far the best line of attack on the day. So, come the end of day two, I had two section wins out of two and was the only angler with a perfect score going into the final day“.

“The final day saw me draw peg 74 in in zone 2, which put me on the bottom bank just along from the corner. Again, I felt it was a fair section with peg 70 being the only real danger peg with it having produced 242lb the day before, but the wind had changed and was now blowing down the other end of the lake. I was hoping it had not taken all the fish with it“!

“There were fish still showing and I felt it was going to be a pellet waggler day with temperatures hitting 30 degrees! I caught on the waggler feeding 8mm pellets to weigh 98lb and win the section finishing just infront of peg 70. The fish eventually moved on making it a difficult last two hours, but I was fully expecting this. Again, I was testing some new prototype tackle in the shape of some new 6g clear pellet wagglers, which work perfectly for targeting large, wise fish at places like Barston. Look out for them in shops soon“!

“Come the end of the festival I had three (3) section wins, which was enough to secure the festival overall meaning I retained the title again this year. A big thank you to Nigel at Barston Lakes for a great event and Guru for sponsoring it. Roll on next year“.