Lee Edwards has qualified for this year’s RiverFest final on his first attempt winning the competition’s most recent qualifier event.

This latest round (round 3) took place on the River Weaver at Northwich, a venue that is known for it’s bream fishing when there’s colour in the water and this latest qualifier was no exception!

Making full use of a favoured end peg draw, Lee made no mistakes and came out on top of not just his zone, but the match overall.

Below, Lee reflects on what will be his one and only RiverFest qualifier of 2019: 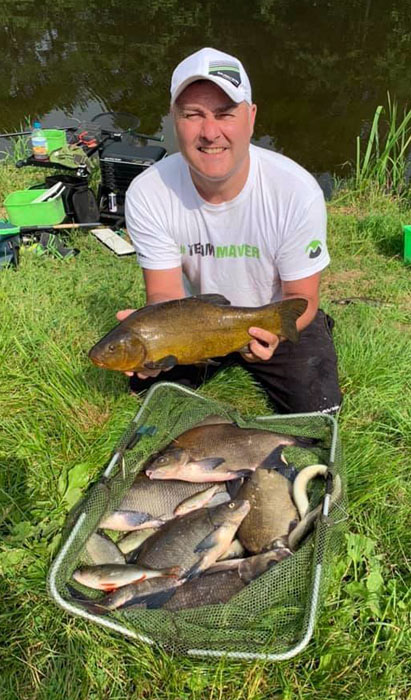 “This was my first RiverFest qualifier event of the year and a new venue for me in the River Weaver at Northwich. I have to say, it’s a lovely looking stretch of water and, despite never having visited before, I was optimistic of a good days fishing with there being a good amount of colour in the river“.

“At the draw, my expectations only grew as I managed to put myself on an end peg. However, my hopes were soon dashed upon learning that the area I’d drawn was known for being a small fish area where the hookbait of choice is normally squatt“.

“I decided to set up three rigs, but didn’t end up picking any of them up! A quick phone call from a friend advised me that the resident bream and carp were spawning in the weeds. Where I’d drawn offered me a couple of small clumps of reeds to fish to so, based on the information I’d received, I opted to concentrate my efforts fishing tight to them“.

“I decided to fish over Thatchers groundbait laced with casters with either caster or a caster / worm cocktail on the hook“.

“As the match wore on, it was apparent the fish were taking the bait on the drop, so I had to constantly lift and drop the rig to tempt a bite and had to keep swapping lines to keep fish coming to the net“.

“Come the end of the five hours, I’d managed twelve (12) skimmers, a single eel, a stunning tench, which led me a right merry dance, as well as some small roach and perch. This was enough to win both my zone and the match outright with 37lbs 3oz“.

Lee will now compete in the two-day weight aggregate final on the fish-rich River Severn at Shrewsbury on the weekend of November 2nd & 3rd, 2019.